A stallion with excellent jumping ability, Vivaldi’s outstanding talents are backed by his first-class pedigree.

The sire Darco is currently the most famous Belgian sire at international level and stems from well-known German bloodlines. He has been very successful as part of the Belgian Nation’s Cup team and has won several Grand Prix. His sire, the Hanoverian Lugano Van la Roche by Lugano sired the Olympic horse Egano ridden by Jos Lansink.

Darco’s dam’s sire Codex, a Holstein by Cottage Son xx, also became well known as a performance sire. Vivaldi’s dam’s sire Concorde is one of the best sons of the internationally successful Furioso II progeny Voltaire, who founded a new line in the Netherlands.

Albführen’s Vivaldi van de Kampel demonstrated his abilities in the 30-day test at the Haupt- und Landgestüt Marbach. The only one of Darco’s sons to be used as a breeding stallion in Baden-Württemberg completed his performance test with a mark of 8.06 for dressage and 8.9 for show jumping and so scored the highest final mark.

He repeated this success with an excellent third place in the 70-day test in 2002. After winning show jumping tests at levels A to M, his series of wins continued at levels M/B and M/A and later also at advanced level.

Between 2006 and 2011 the Swiss rider Walter Gabathuler successfully competed with Vivaldi in national and international tournaments at Grand Prix**** level and collected 22 wins, 17 second places and 20 third places. One of Vivaldi’s currently most successful offspring is Van de Vivaldi.

Via the follwoing link you can watch a video of his son: Vivaldis Credo 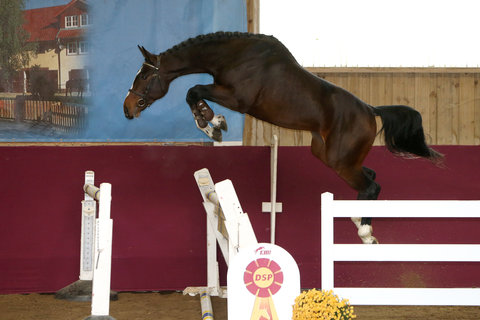