2 or 4 mallets (depending on whether singles or doubles are played), 4 balls, 6 hoops and 1 peg, which is placed in the middle of the court and shows the order in which the balls are played.

A standard court measures 35 x 28 yards. The six hoops and the peg are placed on the court as shown in the diagram.

Outline of the game

Golf Croquet is played between two opposing sides, either as singles (2 players) or doubles (4 players). The aim of the game is to strike the ball with the mallet to run it through as many hoops as possible and score points. Each hoop that the ball passes through is worth one point. The player who first scores a total of 7 points (or a number of points agreed in advance) wins the game.

The balls are played in the same order throughout the game: blue – red – black – yellow. Players may strike the ball only once when it is their turn.

The game starts in the corner near hoop 4 (see diagram). Starting with the blue ball, each player tries to run hoop 1. The player or team that first successfully runs the hoop in the correct direction (see diagram) scores a point. The ball must pass through the hoop completely.

The opposing side has now “lost” the hoop and the contest moves on to the next one (hoop 2).  Each player or team aims to run their own ball through the hoop before the opposing side. As soon as the hoop has been run the contest moves on to the next hoop. The sequence of the hoops is shown in the diagram. The game ends when one player or a team has scored 7 points (or a number of points agreed in advance).

A hoop may be run against the direction of the game but no point will be scored.

If two games are played on the same court at the same time, an alternative set of balls coloured green, pink, brown and white is used. The game starts in the corner near hoop 2 diagonally across from the starting point of the other game. 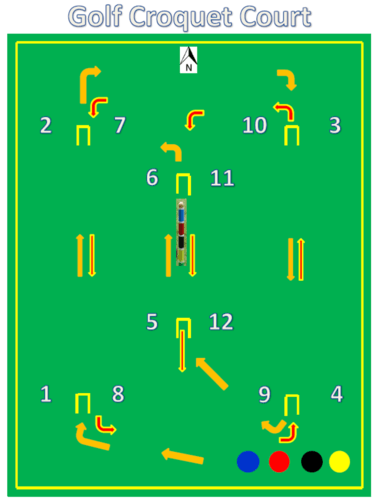